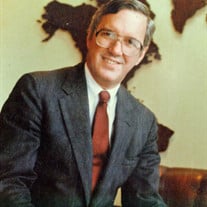 Born in Tyler, Texas, on the eve of 1941, Talbot Shelton Huff Jr. enjoyed a life that encompassed business interests, international travel and a love for history and politics before dying peacefully at the home he and his wife Shirley shared on Smith Mountain Lake. The youngest of three siblings, Talbot spent most of his childhood years in Austin, Texas and embraced business early on, starting a lawn mowing business during his high school summers before heading north to the Massachusetts Institute of Technology. Talbot, who found a lifelong circle of friends among his Sigma Chi fraternity brothers, graduated with a degree in electrical engineering (1962), and several years later with a master's degree from Rice University in Houston. He spent his early working years at Sanders Associates in Nashua, NH living first in Lexington, Massachusetts and later in Bedford, New Hampshire with his wife, Anne, and two daughters. In 1978, he accepted a job at the defense contractor E-Systems, which was later acquired by Raytheon Co., rapidly moving up to the role of Vice President and General Manager for the company's Melpar Division in Falls Church, Virginia. After the death of his first wife and retirement from E-Systems, Talbot moved to Smith Mountain Lake, where he and Shirley lived for nearly 24 years. He attended Patmos United Methodist Church in Huddleston and became very active in politics both locally and further afield. He was elected to the Bedford County School Board (2002-2009) and served as a delegate to the Republican National Convention in 2000 in Philadelphia. Talbot's career spanned slide rulers to pocket size computers (smart phones). He relished competing, whether that involved negotiating a good deal on a new car or winning that next round of cards. He traveled widely for business and pleasure, from London to Indonesia to Caracas and later in life completed several cross-Atlantic trips on the Queen Mary as well as a 2200-mile circuit of Yellowstone, Bryce Canyon, and other national parks in the western U.S. Through the years, he pursued genealogy, tennis, golf and soaking up the lake view from his front porch. He rarely turned down a single malt scotch. Above all, he remained fiercely loyal to family and friends. Along with his wife Shirley Harman Huff of Huddleston, Virginia, Talbot is survived by his daughters Charlotte Huff and her husband Jeff Claassen of Fort Worth, Texas and Portia Huff Wells and her husband Johnny Wells IV (Johnny) of Nashville, Tennessee; stepdaughters Karen Cothran George of Altavista, Virginia and Dawn Hatcher and her husband Bruce Hatcher of Raleigh, North Carolina; and his sister Jane Lou Huff Caserta of Durham, North Carolina. He was blessed with many grandchildren: Joshua George, Katherine (Katie) Pollard, Dustin Hatcher, James George, Rhys Claassen, and Christian Hatcher. He was predeceased by his parents Talbot Shelton Huff Sr. and Mildred Seay Huff; his wife Anne Davies Huff; and his sister Millicent Huff. Memorial services will be held at 2 p.m. Friday, Sept. 17, 2021, at Patmos United Methodist Church, 1405 Patmos Church Road, Huddleston, Virginia. Burial will be at noon Monday, Sept. 20, 2021, at Fairfax Memorial Park Cemetery, 9900 Braddock Road, Fairfax, Virginia. Arrangements by Finch and Finch, Inc. Funeral and Cremation Service, 809 Main Street, Altavista, Virginia. (434) 369-5621. In lieu of flowers, the family requests that donations be made to Patrick Henry Family Services, 1621 Enterprise Drive, Lynchburg, VA 24502.

Born in Tyler, Texas, on the eve of 1941, Talbot Shelton Huff Jr. enjoyed a life that encompassed business interests, international travel and a love for history and politics before dying peacefully at the home he and his wife Shirley shared... View Obituary & Service Information

The family of Talbot Huff created this Life Tributes page to make it easy to share your memories.

Send flowers to the Huff family.