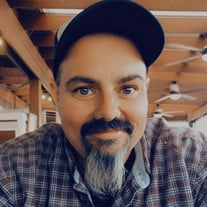 Thomas Phillip "Phil" Boley, 41 years young, went to reside in Heaven with his Lord and Savior Jesus Christ, Wednesday April 7th, 2021. He is survived by his beloved wife, Andrea Emerson Boley, and his three precious children: Cameron "Blake" Boley, Caden Blane Boley "Bubby", and Emerson Marie Thomas "Emmy". Born August 5th, 1979 at Virginia Baptist Hospital, Phil was the firstborn and favorite child of his Mother Debra D. Boley and Father Thomas K. Boley. Phil's siblings, Angela N.B. Turner, Ashley Boley Lambert, and Tiffany Boley Kirby all knew and understood that Phil has always been the favorite child of his parents, and most likely he is also their own favorite sibling. Phil loved his brother's in-law, Andrew Turner "Bubba", Erik Lambert, and James Kirby. Phil dearly loved and was loved in return by his mother and father in law, Shelia and Spencer Emerson Jr., and his sister in law, Jennifer Crowder and her husband David. Phil was the most beloved Uncle to Andrew Brumfield "Drew", Annie Mae Crowder, James Kirby Jr. "Peanut", Eli Kirby, as well as three Angel Baby Lamberts that he will be the first to hold in Heaven. He attended Greenfield Baptist Church and dearly loved Pastor RG Rowland, who supported him throughout many of his struggles. Phil's chosen profession was driving a log truck. He was very proud of working for Pro-Logging, and he was affectionately known as Pro-Boley by his friends. Phil was a valued employee of Larry "Axman" Roach and would have wanted to thank Larry for all the friendship and support that was given to him. Phil was a member of Altavista Fire Department for over 15 years. He started as a junior member and continued volunteering for many years. He was dedicated to helping others and living a life of service. He loved his brothers and sisters in the fire service. Phil had a life mission to tell other's about Jesus Christ. Phil knew that he would go to be with the Lord, and it was important to him to share his faith and the hope that Jesus Christ can give. He shared his story through social media and has reached many thousands of people. His faith defined how he lived his life and it defined how he passed into Glory. Phil now resides in his Heavenly home. Phil left this world knowing that because of salvation through Jesus he would live forever and that one day he would never be separated from his wife, his children, or his family and friends again. A funeral service will be held 3:00 p.m., Sunday, April 11, 2021 at the Altavista Fire Company with interment to follow at the Emerson Family Cemetery. The family will receive friends one hour prior to the service. Paying of respects for those not able to attend the funeral will be held at Finch and Finch Funeral and Cremation Service in Altavista on Saturday April 10th from 9:00am-9:00pm. The family suggests those wishing to make memorials consider the Altavista Fire Company, 1280 Main St Suite B. Altavista, VA 24517.

The family of Thomas Phillip "Phil" Boley created this Life Tributes page to make it easy to share your memories.

Send flowers to the Boley family.