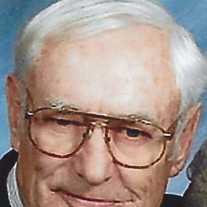 Waldo Lewis Worsham, 90, of 397 Epsons Road, Long Island died Wednesday, July 1, 2020 at his home. He was the husband of Betty Jean Harris Worsham for sixty-seven years. He was born December 16, 1929 in Pittsylvania County, a son of the late George Robert Worsham and Mattie Hamlett Worsham. He was a member of Straightstone Baptist Church where he served as an usher and a member of the Adult Sunday School Class. Mr. Worsham retired from Delta Star with thirty-two years of service as maintenance supervisor and a charter member and former Vice President of the Long Island Ruritan Club where he helped in the construction of their building. He was a U.S. Army veteran where he served as a Master Sergeant during the Korean Conflict and received the Purple Heart. He enjoyed hunting with his sons and was very gifted in plumbing, carpentry, mechanical and electrical work and shared his talents by teaching his sons. He built his home and helped two of his sons build their homes. In addition to his wife, he is survived by four sons, Michael Lewis Worsham of Long Island, Dennis Wayne Worsham (Teresa) of Gretna, William Glenn Worsham (Sharon) and Bobby Ray Worsham (Paula) all of Gladys; one brother, Sterling Randolph Worsham of Richmond; five grandchildren, Brandon Wayne Worsham (Danielle), Shana Nicole Worsham, Kimberly Dawn Bourne (Wayne), Kevin Ray Worsham, and Emily Jean Worsham; and two great grandchildren, Ava and Branson. He was preceded in death by five brothers, Link, Doug, PeeWee, Waverly, and Edison; and four sisters, Cleo, Vida, Gail, and Avis. A funeral service will be conducted at 11:00 a.m., Monday, July 6, 2020 at Straightstone Baptist Church by the Rev. Jim Fox and Rev. Jim Manuel. Interment will follow in the church cemetery with military honors by American Legion Altavista Memorial Post 36 and Gretna Post 232. The family will receive friends from 5:00 until 7:00 p.m., Sunday at Finch and Finch Funeral and Cremation Service, Altavista. The family suggests that those wishing to make memorials consider Straightstone Baptist Church, 4660 Straightstone Road, Long Island, VA 24569.

Waldo Lewis Worsham, 90, of 397 Epsons Road, Long Island died Wednesday, July 1, 2020 at his home. He was the husband of Betty Jean Harris Worsham for sixty-seven years. He was born December 16, 1929 in Pittsylvania County, a son of the late... View Obituary & Service Information

The family of Waldo Lewis Worsham created this Life Tributes page to make it easy to share your memories.

Send flowers to the Worsham family.