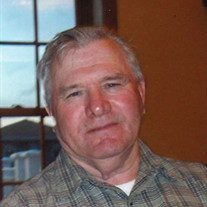 Wayne Darryl Turner, 76, of 280 Masons Mill Road, Evington died Monday, August 31, 2020 at Centra Lynchburg General Hospital with his family by his side. He was the husband of Rosa Brown Turner for 45 years. He was born March 4, 1944 in Appomattox, a son of the late Lewis Edward Turner, Sr. and Mae Webb Turner. He was a former member of Moose Lodge #1727 on Waterlick Road and a self-employed concrete finisher. He was a U.S. Army Veteran. Wayne loved to hunt, fish, watch boxing and little league baseball world series. His greatest passion was hunting his trophies included deer, bobcat and black bear. Due to a head injury in 1969 Wayne was deaf and became one of the first adults in the Lynchburg area to receive the cochlear implant at UVA in 1987 which enabled him to hear sounds and communicate better. After suffering a stroke in 2009 he enjoyed going to Myrtle Beach to people watch. He fought long and hard to overcome his disabilities from his stroke. In addition to his wife, he is survived by one son, Shannon Turner of Evington; two daughters, Wendy T. Staton and her husband, Philip of Rustburg and Stacey T. Pritchett and her husband, Garey of Forest; two brothers, Kenneth Turner and his wife, Betty Marie of Forest and Jamie Wright and his wife, Jessica of Forest; five grandchildren, Jonathan Hawks and his wife, Jessica, Matthew Glass, Michael Glass, Camden Pritchett and Emma Pritchett; a sister in law, Linda Turner of Forest and a devoted friend, Leon Wilson. He was preceded in death by a son, Jason Turner; one brother, Lewis Turner; and one sister, Gail Staples. A funeral service will be conducted at 11:00 a.m., Thursday, September 3, 2020 at Finch and Finch Chapel, Altavista with interment to follow in Salem United Methodist Church Cemetery with military honors by the American Legion Altavista Memorial Post 36 and Gretna Post 232. The family will receive friends from 6:30 until 8:00 p.m., Wednesday at Finch and Finch Funeral and Cremation Service, Altavista.

Wayne Darryl Turner, 76, of 280 Masons Mill Road, Evington died Monday, August 31, 2020 at Centra Lynchburg General Hospital with his family by his side. He was the husband of Rosa Brown Turner for 45 years. He was born March 4, 1944 in Appomattox,... View Obituary & Service Information

The family of Wayne Darryl Turner created this Life Tributes page to make it easy to share your memories.

Send flowers to the Turner family.