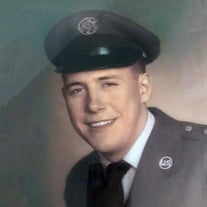 It is with immeasurable sadness the Johnston girls announce the home going of our beloved husband and father. William Emmett Johnston was peacefully welcomed by our Lord and Savior on December 19th, 2021 into the paradise of heaven at the age of 87 and 10 months. Also known as Bill or Billy, he was devoted to his cherished wife, Peggy Joice Hailey Johnston for 67 years and three months. Their love story was none less than that of Ronald and Nancy Reagan or Billy and Ruth Graham. He was the treasured and devoted father of four daughters, Cheryl Dawn Piquette of Moneta, Virginia, Lisa Lind Johnston of Rockville, Maryland, Elizabeth Susan Johnston-Robinson of Sharpsburg, Maryland, and predeceased by his second daughter Diane Joice Johnston. He was very loved and admired by six grandchildren, John Patrick Ricker, Joshua David Ricker, Hailey Dawn Preston, Nicolle Mae Piquette, Kyle Mitchell Piquette, and Madison Lolabeth Diane Robinson including two great grandchildren, Austin Emmanuel Ricker and Brooklyn Valentina Ricker. No brother-in-law could have loved, treasured, and admired Bill more than Wayne Hailey of Hurt, Virginia, will all his heart. William Emmett Johnston, of Rockville, Maryland, was born on February 3rd, 1934, in Spout Spring, Virginia. He was the fourth child of John Dunn Johnston and Isabelle Allison Johnston. He is survived and loved by a sister, Sallie Thompson of Lynchburg, Virginia. He grew up attending Old Concord Presbyterian Church in Spout Spring, and listening to Billy Graham on the radio with his brother John. He graduated from Appomattox High School in 1952 and spoke at numerous class reunions over the years, the last being in 2017. At eighteen he enlisted in the Air Force and was later stationed at McGuire Air Force Base in New Jersey in 1956, where his first daughter was born. He graduated from Lynchburg College with a Bachelor Degree in 1961, where upon a second daughter was presented as a graduation gift! He worked for Bell Atlantic as a second level accountant for thirty-two years and enjoyed being on a bowling team of co-workers. Thereafter, a strong work ethic led him twenty-three years as a professional driver for Enterprise-Rent-A-Car. He loved the long drives to Kentucky, Ohio, New York, West Virginia, and Missouri. Bill enjoyed working during elections, helping the public vote as an election official at the booths. Bill's greatest passion in his life was his family. He dedicated endless hours to the needs and desires of his wife and daughters, who were always top priority and whose future important to him. He took ballroom dancing lessons to please his wife and she never had to grocery shop. He helped maintain and give advice on her rental properties. He absolutely loved being the personal swim coach of his youngest daughter, timing at her meets and always encouraging her. Each summer he would take his family on wonderful vacations to places such as Nags Head, Myrtle Beach, Stone Mountain, Disney World, New Orleans, and Williamsburg. Each daughter was given a college education and words of wisdom to cherish in their hearts. Every Christmas he purchased a large Honey Baked ham for his daughter's family, even the year with an almost broken ankle. He never failed to express pride in his children and grandchildren; whether it was his daughter who worked at Channel 9 or his grandson playing football and baseball. He enjoyed Redskin games immensely with his brother-n- law and the Wizards with his grandson. He prayed The Lord's Prayer over his family and cherished each one with all his heart. Truly William Emmett Johnston was a great man, forever cherished and held dear in our hearts, and a blessing from God. We so love you, Daddy Bill.

It is with immeasurable sadness the Johnston girls announce the home going of our beloved husband and father. William Emmett Johnston was peacefully welcomed by our Lord and Savior on December 19th, 2021 into the paradise of heaven at the age... View Obituary & Service Information

The family of William Emmett Johnston created this Life Tributes page to make it easy to share your memories.

It is with immeasurable sadness the Johnston girls announce the...

Send flowers to the Johnston family.