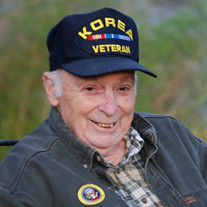 William Edward "Eddie" Witt, Jr., 82, of Altavista died Wednesday, November 21, 2018 at home. He was the husband of the late Emily Lynill Rowland Witt for fifty-five years. He was born January 1, 1936 in Lynchburg, a son of the late William Edward Witt, Sr. and Amanda Louise Reynolds Witt. He was a member of Hurt United Methodist Church, a U.S. Army veteran of the Korean Conflict, and retired as a supervisor from The Lane Company. Eddie enjoyed hunting, fishing, and sports, and was a YMCA baseball coach. He had a great love of music and sang in the church choir for many years. His greatest joy was his family. His grandchildren were the light of his life and he loved making them laugh. Eddie always had a smile on his face and left people with a cheerful, "God loves you now!" He is survived by a daughter, Heidi Witt Stallings-Perry (Dustin) of Gretna; a son, Jonathan Edward Witt (Candice) of Altavista; three brothers, Lewis Witt (Song) of Woodbridge, Johnny Witt (Ann) of Rustburg, and Larry Witt (Jean) of Forest; one sister, Nancy Davis (Gary) of Evington; five grandchildren, Taylor and Somer Brashear, Kain Stallings-Perry, Ashley Witt, and Cameron Pruitt; and his little buddy, Prince. He was preceded in death by a daughter, Martha Ellen Witt. A funeral service will be conducted at 2:00 p.m., Sunday, November 25, 2018 at Hurt United Methodist Church by the Rev. Dr. Eric K. Rowland and assisted by Rev. Robert Thorne. Interment will follow in Altavista Memorial Park with military honors by American Legion Altavista Memorial Post 36 and Gretna Post 232. The family will receive friends from 7:00 until 8:30 p.m., Saturday at Finch and Finch Funeral and Cremation Service, Altavista. The family suggests that those wishing to make memorials consider Hurt United Methodist Church, 196 Ramp Rd., Hurt, VA 24563.

William Edward "Eddie" Witt, Jr., 82, of Altavista died Wednesday, November 21, 2018 at home. He was the husband of the late Emily Lynill Rowland Witt for fifty-five years. He was born January 1, 1936 in Lynchburg, a son of the late William... View Obituary & Service Information

The family of William Edward Witt Jr. created this Life Tributes page to make it easy to share your memories.

Send flowers to the Witt family.